Located in the heart of Raheny Village beside the Garda Station, Raheny GAA Club offers a wealth of facilities to its members and local community. The club fields in excess of 50 teams, all managed and coached by local volunteers. 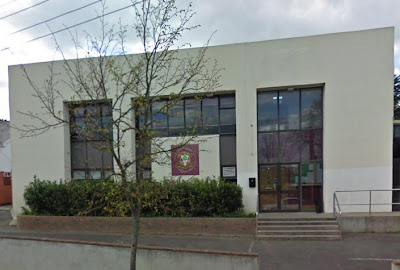 The club has the use of 5 pitches in St Annes and is more than half way through a redevelopment scheme 2000-2010, that has so far provided 6 new Male changing rooms and 2 Ladies changing rooms, each with showers/toilets.

The club was successful in its 2006 Grant Application under the Sports Capital Programme and was approved for funding of €100,000 towards the cost of a new all-weather pitch, fencing, hurling skills wall ands floodlighting. The club raised an additional €150,000 and the new Pitch and Hurling Wall was commissioned in September 2007 and is available for use, primarily for Juvenile teams. Adult club member's play Social Ball late on Friday and Sunday nights (some slots available)

Friday, Sat & Sunday nights between 8-10pm have been allocated for members Social ball, anybody who wants to book a pitch slot, for availibility, please contact Tommy Hogan the club at 01-8313530 or by email to rahenygaa@gaelic.ie

We were also granted a further €120,000 funding under the 2007 Sports Capital Programme and the club has matched this money to start the development of a further 2 ladies dressing rooms, a new gym/games room , a new social lounge , kit storage room and a new office/committee room. Full Planning Permission (2466/08) was granted July 2008. Building work on this project commenced August 2009, completion due by year end. The Fundraising Committee are back in action and plan is to raise monies to kit out this new building, which was completed in February 2010.

We have refurbished the club hall for dual use as a sports hall for Juveniles and a Function room with capacity for up to 150 guests, with a full bar service. The function room is availible on request for everything from Parties, AGM's, Birthdays, Wedding Anniversaries, Retirement Parties to Funerals.

Full bar, waiter and catering facilities are available and the manager can assist with any catering, DJ, Band requirments.

To book the club hall for functions contact the Bar Manager Tommy Hogan on 831 3530. or email rahenygaa@gaelic.ie

The club crest was commissioned and designed in the mid 1980s.
The then Club Committee approached Eithne Bn. Ui Laoi to design a crest which would be fitting of and represent the local area. Eithne asked her son Tony, what he would associate with playing for the club and his answer was, “ The Oak Trees in St. Anne’s Park”. The finalised crest was presented to the club and great credit is due to Eithne for the splendid design which truly captures the essence of the club and our community. 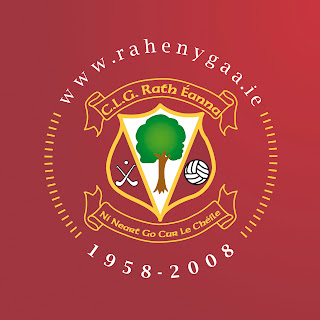 Shield: A composite shield forms the main part of the crest which is divided into three sections consisting of an oak tree in the centre, crossed hurleys and sliotar on the left side and a football on the right.

The club motto: Ní neart go cur le-chéile at the bottom of the crest.

The logo originated from a Celtic design Eithne painted for the club hallway. There was a lot of ‘Cur-le-chéile’ (working together), in the painting so Eithne decided on our motto of: ‘Ní neart go cur le-chéile’ (There is no strength without working together).

Fr. Ryan one of our club founders bought the first set of maroon jerseys. Maroon, Fr.Ryan explained many years later for no better reason than that Galway, in their famous maroon, had just won the 1956 All-Ireland Final. Maroon and white are still our club colours to this day.